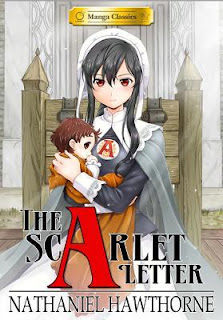 by Crystal Chan; illus by SunNeko Lee
My rating: 4 of 5 stars

I really enjoyed this adaptation. I haven't read the original and am not likely to but have read a prior graphic adaptation. While the back notes do say some story arcs have been left out (due to space) it is basically the same plot as what I've read before from a Papercutz adaptation. The religious themes of the original story are forefront, but this adaptation does not concentrate on Hester's deep faith instead keeping the focus more on Chillingworth's evilness. The art even plays with shadows, etc at times making him appear to have horns or a mask. The story plays out very well in manga form. Little Pearl is the perfect cute wide-eyed girl and the Reverend has been drawn with long hair to play the role of handsome young man. I've read two books in this series and eagerly read both of them. I'm keen to start on another.