I am thrilled to be a part of First Second Book's Blog Tour for their popular anthology "Fable Comics".  Please join me for an introduction to this book and my interview with R. Sikoryak, the author/illustrator of his piece, an adaptation of Aesop's 'The Lion and the Mouse’.


From classics like "The Tortoise and the Hare" and "The Grasshopper and the Ants" to obscure gems like "The Frogs Who Desired a King," Fable Comics has something to offer every reader. Twenty-eight fables from different cultures and traditions are wonderfully adapted and illustrated in comics format by twenty-six different cartoonists. Edited by New York Times bestselling Fairy Tale Comics' Chris Duffy, this jacketed hardcover is a beautiful gift and an instant classic. 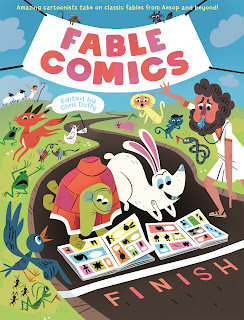 James Kochalka and ‘The Fox and the Grapes‘
Tom Gauld and ‘The Town Mouse and the Country Mouse’
George O’Connor and the ‘Hermes’ fables
Sophie Goldstein and ‘Leopard Drums Up Dinner’
Charise Harper and ‘The Belly and the Body Members’
R. Sikoryak and ‘Lion + Mouse’
Jennifer L. Meyer and ‘Fox and Crow’
Eleanor Davis and ‘The Old Man and Death’
Jaime Hernandez and ‘The Boy Who Cried Wolf’
Simone Lia and ‘The Crow and the Pitcher’
Graham Chaffee and ‘The Dog and His Reflection’
Maris Wicks and ‘The Dolphins, The Whales, and The Sprat’
Vera Brosgol and ‘The Hare and the Pig’
Kenny Widjaja and ‘The Demon, The Thief, and the Hermit’
Corinne Mucha and ‘The Elephant in Favor’
Liniers and ‘The Mouse Council’
Mark Newgarten and ‘Man and Wart’
Israel Sanchez and ‘The Milkmaid and Her Pail’
Ulises Farinas and ‘The Great Weasel War’
R.O. Blechman and ‘The Sun and the Wind’
Graham Annable and ‘The Hare and the Tortoise’
John Kerschbaum and ‘The Grasshopper and the Ants’
Braden Lamb and Shelli Paroline and ‘The Thief and the Watchdog’
Gregory Benton and ‘The Hen and the Mountain Turtle’
Roger Langridge and ‘Demades and His Fable’

It's All Comic To Me Interview with R. Sikoryak

It's All Comic To Me:  When did you first decide to make a living from your comic art?

R. Sikoryak: I’ve loved comics for as long as I can remember, and I’ve been drawing them pretty consistently since I was very young. Growing up, my brothers and I would write and draw stories together, too.

Today I make my living through a variety of jobs: teaching illustration, lecturing on comics, and writing and drawing for print and animation projects.  It’s mostly related to comic art, but it’s applied in different ways. I always return to comics.

IACTM: What tools do you prefer to work with to create your art?

R. Sikoryak: I work traditionally, using brushes, pen and ink, and bristol board, as well as digitally, using a Cintiq computer display and a stylus.  Often I combine the two—doing rough sketches on the computer, then printing out and inking the lines on paper, and finally scanning and coloring the black and white art in Photoshop.

IACTM: Your piece in Fables, "The Lion and the Mouse", is very funny including a lot of wordplay. Would you say humour is an important element to your overall work?

R. Sikoryak: Thanks! Growing up, my favorite newspaper comics strips were the funny ones, like Peanuts and Nancy.  Those are two I still love. And the early MAD Magazine comics were really eye-opening!  So I’ve always associated comics and comedy.  Humor is crucial to me. Even my most “serious” comics aren’t entirely serious.

IACTM: "The Lion and the Mouse" originally comes from circa 550 BC. How hard, or easy, was it to make the fable relevant to a 21st century audience.

R. Sikoryak: I didn’t actually think too much about making the fable relevant. Human nature — or animal nature – never really changes, so a good fable will always resonate with readers.

Also, the style I used to tell this fable was inspired directly by George Herriman’s brilliant comic strip Krazy Kat, which ran from 1913 to 1944. So that brings it into the 20th century! Actually, Herriman was so far ahead of his time, perhaps he brought it to today.

IACTM: Who has had the greatest influence on your life outside of the industry?

R. Sikoryak: Only one?  Outside of comics, I’d say the greatest early influence on my work was the 20th century composer John Cage. His writings and music were quite radical and greatly affected the way I think of making comics (although I’m not the revolutionary he was!). For instance, his music was not about self-expression but was inclusive, welcoming chance and everyday sounds into his compositions. He was both rigorous and playful in his art-making. Cage’s book Silence is an engrossing and entertaining introduction to his ideas. In college, I adapted some of his anecdotes from that book into series of comic strips, and that process really informed all of my future comics.  I think my use of parody and appropriation is connected to his approach, as I strive to include disparate points of view (through both style and narrative) into my comics.

Join the rest of the tour and meet the other artists by following this schedule!