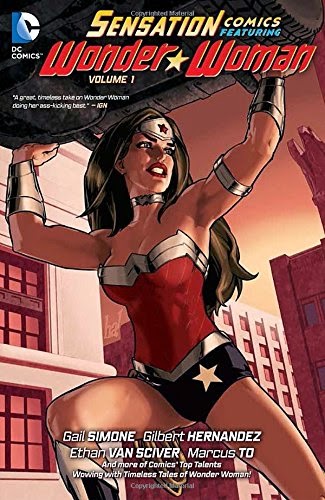 It is unclear whether these are original stories or re-imaginings of stories that first appeared in the original Sensation Comics, either way they are exciting and a ton of fun. Presented in the old format of comics where only one to three issues contained a storyline, the stories are otherwise unrelated. Some feature Wonder Woman as an adult, some as a child, some as an established superhero, others flashback to her time on Paradise Island. Each story arc has different writers and illustrators so WW is given different looks, some as we would expect and one I found very unsettling (she looked more like Arnold Schwartzenegger). The only thing that put me off were the PSAs dropped in about three times altogether. Perhaps this is in imitation of the original Sensation Comics, if so I'm sure I would find those campy and out-dated, but the modern PSAs here are incredibly heavy-handed, eye-rolling, preachy and could be offensive if you don't agree with them. That brings my rating down to a four, otherwise I was completely captivated by the stories which included a host of popular (and not so popular) villains and a few cameos from other superheroes. Delightfully enough one of favourites appeared: Deadman!