Last of the Sandwalkers by Jay Hosler 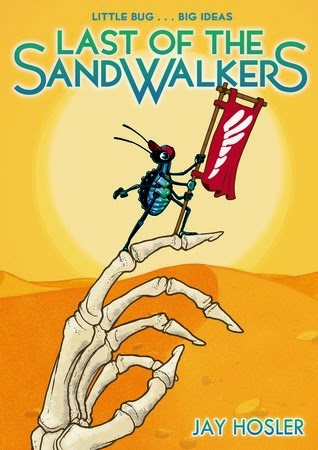 Last of the Sandwalkers by Jay Hosler
My rating: 3 of 5 stars

This is a big book at over 300 pages with a lot of text. At first, I found it hard to get into. The anthropomorphic insects (beetles to be precise) are the main characters in this animal fantasy quest. The misfit scientific beetles are positive there is more to their world than the 'oasis' where they live which is strictly run under the precepts of the god Scarabus, generally maintained and controlled by the order of the Scarabi. These rogues out on their quest to discover if other life forms exist and find sabotage and treachery amongst themselves. They are a motley crew with high scientific knowledge and each beetle species has special skills and talents useful to the expedition which eventually turns into a rescue mission. The more I read the more I settled into the story and certainly found the characterization the main element that kept me entertained. They are a lovable bunch with human emotions and personalities, even the robot. Throughout the book, the author manages to import factual information about beetles and entomology as the story progresses. Sometimes this works seamlessly, other times it felt a bit like a timeout for a lesson. I can't say I personally am too keen on learning anything about beetles or insects in general (except how they are used in forensics LOL) so I found the book fun and entertaining in parts and that it dragged and lost my attention in others. It would certainly appeal to the amateur entomologist and would make a great impact used within a science curriculum. The end of the book is full of copious page by page factual scientific annotations. Definitely worth adding to a library collection.