Phoebe and Her Unicorn: A Heavenly Nostrils Chronicle by Dana Simpson 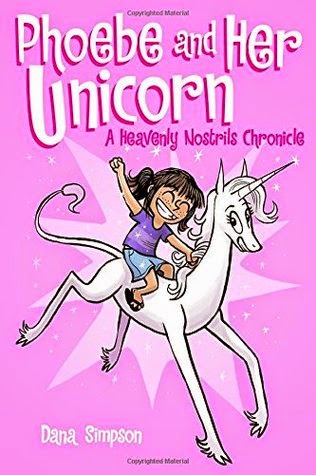 Phoebe and Her Unicorn: A Heavenly Nostrils Chronicle by Dana Simpson
My rating: 3 of 5 stars

With a foreword by Peter S. Beagle comparing this to Charlie Brown and Calvin & Hobbes. I was pretty impressed. However the book failed to deliver. It's a comic strip compilation and though it's about a child, like the previously mentioned comics, the humour certainly appeals to the adult. While Phoebe and Marigold will appeal to children I doubt they will get all the nuances of that humour. Myself, I'm not into comic strips and it took me a while to "get into" this collection. I did think of not completing it around page 89 as I certainly had the feel for it by then but at that point I also had a slight fondness for the characters and continued on to the end. I found some of it cute, some of it made me crack a smirk and some of it did nothing for me at all.