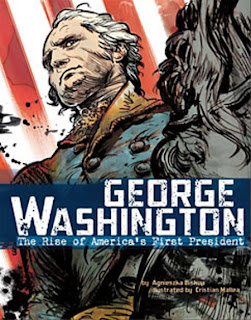 Publisher's Summary: "George Washington had fought bravely during the Revolutionary War. The people saw him as a hero. They wanted to make him king. But Washington didn’t want that kind of power. Instead, he became the first president of the United States. Follow this war hero as he leads his troops into battle and shares their losses and success"


Acquired: Received a review copy from the publisher.

Reason for Reading:  Biographies and memoirs are one of my favourite graphic genres.

Pay particular attention to the subtitle of this book as it accuarately describes what this book is about.  Concentrating only on Washington's life as a soldier and how he came to be president the book is told in his own voice as he tells the story of when they came to tell him he had been elected president.  From then he reminisces about his involvement in the Revolutionary War, first of all being quite against it, hoping for a peaceful settlement since he had fought hard for the British in the previous war.  However he was soon disappointed in the King and appointed leader of revolution armies.  The book continues on to tell about battles he participated in, his war career in general and why he was respected and elected president even though he was reluctant to take on the role.  The book quickly ends with his retirement and death.  Honestly, I found the war details tedious and boring, but this is a topic I've read much about and am not especially interested in reading about Washington much anymore.  I was disappointed to see that Washington was not portrayed or even shown to be a slave owner.  There were several views of his home at Mt. Vernon and the abscence of his slaves on the property was conspicuously noticable.  Interesting book for what it attempts to do.
Labels: 2012 3* biography capstone press graphic novel MG nonfiction war