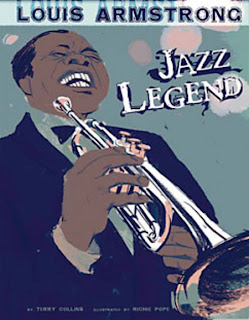 Publisher's Summary: "Louis Armstrong, also known as “Satchmo” and “Pops”, became an American jazz legend in the 1920s. His voice and skill with instruments helped him become a popular musician in a time where America was racially divided. Watch as this skilled musician learns to play, buys his first instrument, and becomes one of the best music makers of the era."


Acquired: Received a review copy from the publisher.

Reason for Reading:  Biographies and memoirs are one of my favourite graphic genres.

A brief but rich look at the life of Louis Armstrong, mostly referred to as "Satchmo" throughout.  Told from his own point of view as he tells his story from his hospital bed in the 1970s, Armstrong lived through a tumultuous era in America, especially for a black man.  He had a tough life as a child spending a portion of his childhood in a home for black waifs and working to help support his mother.  Though there are some references to the racial and political problems Louis experienced the book focuses mostly on his music and his career on stage and screen.  He is presented as a happy man with a positive outlook and attitude.  By the end of the book I was humming "It's a Wonderful World" and was pleased to have learned a bit about this man whom I had previously known nothing but his music.
Labels: 2012 4* African-American biography capstone press graphic novel MG nonfiction