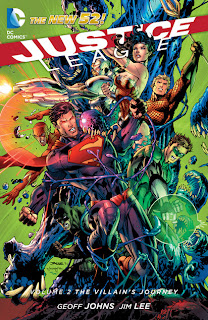 
Publisher's Summary: "Now that the team’s origin story is complete, we shift to the present-day Justice League! What has changed? Who has joined the team since? And why does Green Arrow want to join those ranks so badly?
• Plus, someone is out to get the Justice League, and he is determined to show the world how mortal these godlike beings really are!
• Collects JUSTICE LEAGUE #7-12."

Acquired: Received a review copy from the publisher through Edelweiss.  But have since bought my own print copy.

Reason for Reading:  Next in the series.

I'm hooked on this series!  Thrilling storyline with plenty of character development getting readers up to speed on characters they may not know much about.  There are lots of small flashbacks (sometimes just a frame) worked in throughout the book reminding us (or telling new readers) that Batman's parents were gunned down in front of him as a child and so on with the other heroes.  This volume has two story arcs running back to back while both running under the main storyline of an evil force who wants to bring the JL down to size in the eyes of humanity.  The first story arc has Green Arrow hot to trot and anxious to be a member of the team.  With no welcome in sight he follows them around showing off his stuff but as to paraphrase Lantern.  "We already got a guy with no superpowers and I'm the green one, change it to Blue Arrow and we might talk about it!"  GL's tiny humorous nips at Batman's lack of any real superpowers continue as do everyone else's at each other.  These are not a group of people who particularly like each other, though we do find out who has been seeing or helping who behind the other's backs.  And this is the focus of the  second story arc.  The group's infighting, petty jealousies, major attitudes towards each other coupled with the personal human or relationship side of their lives leaves them vulnerable to the one who is trying to bring them down.

This is the only New 52 series, I am currently reading.  However I am wanting to spread out from here.  This volume references several: starting off immediately with complaints to have Justice League International disbanded even though Batman had joined in with them. Flashes are shown of various superheroes fighting "the owls" which refers to the New 52 Batman series.  I also noticed a reference to Aquaman being the leader of "The Others" which refers to  Aquaman Vol. 2.  Also the end of this volume advertises the forthcoming of "Justice League of America" which is very exciting!  I'm sure I may have missed others.  I'm going to take note of this though to help guide my reading.  At this time I'm going to pick up the Batman (my fav. of the biggies) and the JLI trades (there are only 2, it was cancelled after 12 issues) for more immersion in the new DC Universe.  And I eagerly await the JL of A volume!
Labels: 2013 5* DC Comics graphic novel superheroes YA