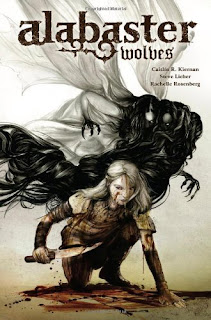 First sentence: "July, one day or the other nowhere in particular, South Carolina."

Publisher's Summary: "Dancy Flammarion may look like a frail teenage girl, but her journey through the swamps and byways of the American South brings her into battle with werewolves, monsters, and grotesque secrets, armed only with a knife and a mission to destroy the deadly creatures that lurk in shadow. "

Reason for Reading:  Dark Horse is one of my favourite publishers and looking through the new releases this one caught my eye.

The publisher's summary of this is quite simple making it out to be a general "monster hunter" story but it far exceeds that and I came away from it really having enjoyed it.  My only regret is that I was called away from it half way through and had to get into it again when I returned.  Its short length does make for a fantastic one sitting read.  The story is vague on explanations and leaves us intrigued throughout.  We are in some future earth that has suffered a cataclysmic event.  Dancy doesn't run into many other humans on her journey and while she meets various monsters the mainstay in her world are the werewolves which she has some "calling" to destroy.  Dancy is a little unusual herself, being an Albino, and at first accompanied by a Seraph, her mission is filled with Biblical imagery and quotations yet one wonders where she should be putting her trust when later she is joined by the ghost of a female werewolf she has slain.  She is also accompanied by a wise yet annoying talking blackbird.  A very unique, enjoyable story.  Quite violent, use of language is graphic but not overly superfluous.  The art matches the story well and very appreciative in itself.  There are many panels with few or no text bubbles that the eye lingers over taking in the details.  The dark, spooky scenes are especially well done.  The book ends with the impression that the story will continue on.