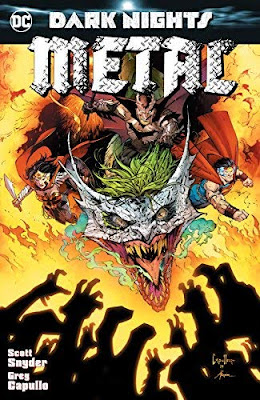 Dark Nights: Metal by Scott Snyder
My rating: 3 of 5 stars

Well, I'm not going to lie. This story is just not my thing. I like stories that take place on Earth 1 or in space but Dark Nights: Metal introduces us to the Dark Multiverse and it is whacko crazy. Batman's nightmares are real here and there are several weird dark Batmans at the helm of this craziness. Set in several realms of this multiverse the Justice League members are trying to combat the forces of evil. There are many familiar villains represented with one popping up all the time throughout. Look closely at the crowd scenes. It's a ride, I'll say that much, and may certainly be right up some reader's alley but not mine.