52. Head Lopper, Vol. 1: The Island or A Plague of Beasts by Andrew MacLean 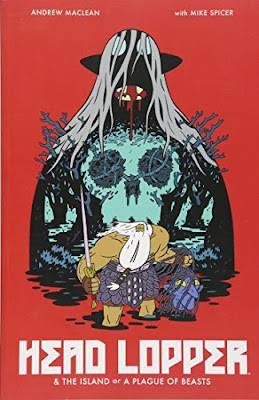 Head Lopper, Vol. 1: The Island or A Plague of Beasts by Andrew MacLean
My rating: 4 of 5 stars

What a riot! This was way more than I had expected. A fantasy quest starring the warrior Head Lopper, so called as he chops off the heads of his enemies without so much as a hello, and his companion, the head of Agatha Blue Witch whom Head Lopper is cursed to carry as his purgatory, while she constantly annoys, yaks and nags at him. The plot of the story is simple with Head Lopper on a quest to kill a sorcerer while court intrigue involves a looming takeover from the widowed Queen. The books' best asset is the characters and the humour; plus the art is fantastic. Head Lopper meets a slew of hideous, unique and odd people/monsters on his quest. I found the humour hilarious and while heads were flying and blood was flowing I couldn't help giggling even out loud a couple of times. Looking forward to reading volume 2 and the further adventures.