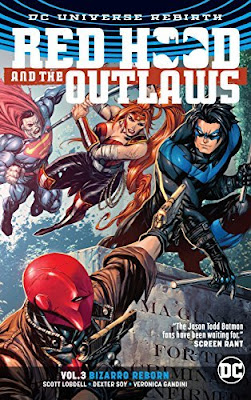 Red Hood and the Outlaws (Reborn) Vol. 3: Bizarro Reborn by Scott Lobdell
My rating: 5 of 5 stars

Since the first two volumes dealt with Jason and Artemis respectfully, it was only expected that this third volume would belong to Bizarro. Bizarro is near death and with LexLuthor's aid, he is healed but much more than that he is transformed. While the changes are obvious, he is also keeping a secret from his team that becomes apparently dangerous to the reader.A great volume filled with guest appearances by many including the Suicide Squad, Batman's new team and Nightwing. Red Hood has always been one of my favourite characters and I'm really enjoying this new run.