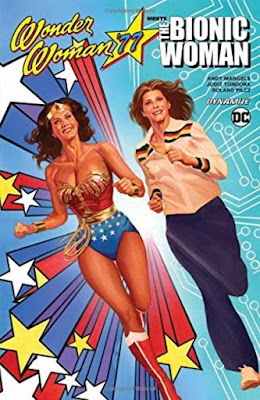 Wonder Woman 77 Meets the Bionic Woman by Andy Mangels
My rating: 3 of 5 stars

Definitely written for the fans. A lot of references to specific episodes of both shows and appearances from a large cast of characters, friend and foe. OSI and the group Diana and Steve work for join forces to go up against evil robot makers (taken from both shows) who are out to take over the world once they can get a certain mineral only found on Paradise Island. Readable, I had fun but I found it both terribly touchy-feely and feminist at the same time, rubbing me the wrong way. The art isn't spectacular but a decent job has been done of drawing the characters similar to their TV versions.