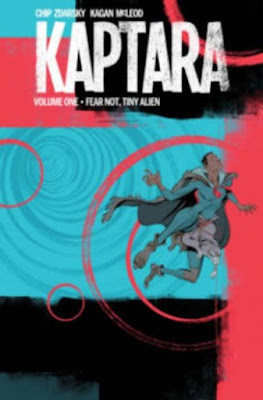 Kaptara, Vol. 1: Fear Not, Tiny Alien by Chip Zdarsky
My rating: 5 of 5 stars

This is a total blast! Starting out as science fiction the space travellers end up on a fantasy world planet inhabited by people who suspiciously seem to be from He-Man of the Universe. From that, I'm taking this to be a cross between a parody of He-Man and barbarian fantasy in general. The book is absolutely hilarious while having a well-plotted storyline. The characters are all wonderful whether they are the good guy, bad guy or weirdly insane guy. The main character is a black guy who is modestly gay. He teams up with a half-feline woman, a warrior with hair better than Farrah Fawcett, a naked wizard and an orb with hands that flashes inspirational quotes at inopportune moments. Slightly violent, coarse language and giggle-inducing humour would make me search out further titles in the series but it looks like the series was cancelled at this point. Too bad!