WWE Superstars #1: Money In the Bank by Mick Foley 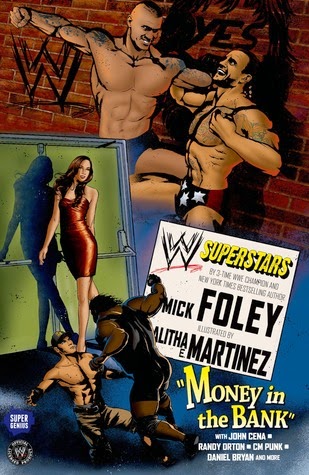 WWE Superstars #1: Money In the Bank by Mick Foley
My rating: 5 of 5 stars

Well, am I surprised at how much I was captured by this story! I'm not a current wrestling fan and don't know who any of these wrestlers are in this book, though the book claims 25 are present. I was a big fangirl back in the days when it was called WWF and Hulk Hogan hadn't won the belt yet. I remember when Hulk and Andre the Giant first fought. Anywho... I found this story to be an exciting cross of many genres and just plain well-written. It takes place in the dark city streets of a corrupt city called Titan City, having classic noir flavour to it. It's a political themed crime as the players try to stop both equally corrupt DA runners from winning the election. The streets are filled with gangs, drugs, and violence and a team puts themselves together to fight the corruption and save Titan City both from the politicians and the criminal civil population. The story is quite involved with a huge cast that I'm going to recommend it for YA's (and adults). Speaking of the huge cast, I was only able to get a grip on the few major main characters but Foley has done an excellent job of keeping readers with the program. He continuously has characters refer to each other by name. Each chapter very briefly works "the story so far" into the opening pages. And personally, I think Foley held this intense story together quite tightly, making me interested in him as a writer. Finally, though the characters are wrestlers and when battles ensue they use wrestling attacks/moves against each other the story and team established in this first book distinctly has a superhero feel to it minus the costumes (though there are a couple such as wrestlers Kane & Mysterio) and superpowers. The art is slick and what one would expect to find in the major publishers, in fact Martinez has worked for both DC and Marvel, amongst others. A surprise hit for me!