Toto Trouble #1: Back to Crass by Thierry Copee 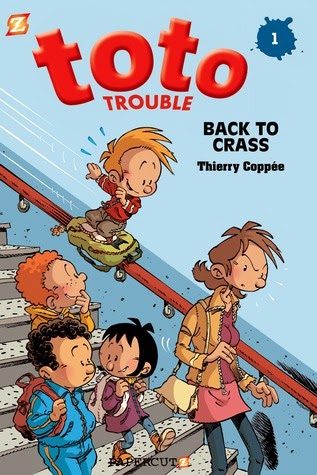 Toto Trouble #1: Back to Crass by Thierry Copee
My rating: 2 of 5 stars


I didn't finish this, reading 40 of 66 pages, but it's just the same thing over and over so I've read enough to comment on it. This is a strange selection for Papercutz. This has no plot but is a collection of one page comic "jokes" but I'm not really sure the intended original French audience would have been children. It's about a little boy and his school life and at home but he's quite snarky and a lot of the jokes could be considered off colour. There are several "dead" jokes: a dead dad, some dead pets, a dead teacher, one I read was suggestive, others are just a tad on the black humour side and could be offensive to a wide variety of audiences. Personally, as an adult, I wasn't offended, though I don't find dead pet jokes in good taste, but I'm not sure I'd be comfortable with my little kid or a sensitive child reading these. I thought they were all mostly worth a snicker but they did get tedious one after another. If it was a daily newspaper comic, I'd probably read it. I like the art though; it's very Calvin and Hobbes-ish.