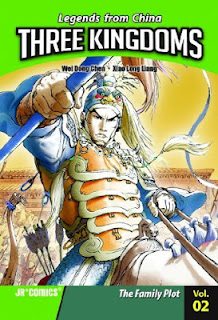 First sentence: "After the coalition army of the 18 feudal lords falls apart, Shao Yuan set his sights on conquering the Ji Provence."

Publisher's Summary: "The coalition has fallen apart. The treacherous Zhuo Dong remains in power. The 18 men who united to save China are now at war with themselves. Now, in order for the fight to continue, a battle will be waged that doesn't involve soldiers, horses, or spears; it involves a desperate man who will go to desperate lengths to rid the world of a tyrannical leader."


Acquired: Received an egalley from the publisher through Netgalley.

Reason for Reading: Next in the series.

While I thought the first volume most suited to this age group due to intellectual maturity, this second volume does become more graphic in all senses: violence, and sexuality both implied and visual.  The first book was almost a whirlwind as we got introduced to the myriad characters and intricate plot, this book does continue in that vein but also settles down into various story arcs.  Several dealing with the battles and politics but a major one in which the volume is named after "The Family Plot" where a plot to bring down a ruthless tyrant is put into action.  The first female character is introduced via this plot and several other characters are explored more fully.  I enjoyed this volume even more than the first one, but still do contend that it is not an easy read.  I read the book in one sitting and recommend that as the best way to read it.  Putting the book down halfway through and picking up again could prove disorienting as there really is a huge cast present here.  It is hard to keep track of everyone but as the story progresses the characters are becoming more familiar.  I could see myself re-reading this series after I'd been through it once.  I didn't mention in my first review but this is based on a Chinese epic written 600 years ago called "The Romance of the Three Kingdoms".