11. Bigfoot Boy: Into the Woods by J. Torres 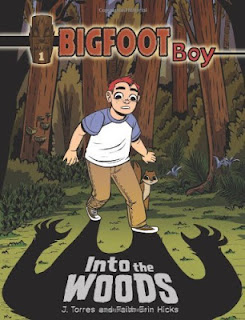 Publisher's Summary: "Rufus is bo-o-o-ored at his grammy's house in the country. But when he follows a girl into the woods and finds a totem in a hollowed-out tree, things become a whole lot more interesting. Especially when he reads the word etched into the magical talisman: "Sasquatch." "


Acquired: Received an egalley from Netgalley, through the publisher.

Reason for Reading:  I love Faith Erin Hicks and read anything new she has out, even if she is only the illustrator.

So not the most original story in the world when a boy ventures into the woods, finds a talisman, reads the word inscribed on it and turns into a 'Bigfoot', uttering the word backwards turns him back to human.  But things get better when we add in the fun characters and side plots.  Rufus is bored staying with his grammy who is watching her soaps and meets a girl who is very attuned to 'her' woods and has the attitude to match her self-imposed ownership.  He also meets a talking squirrel who becomes his ally once he turns Sasquatch.  When the local wolf pack discovers he's found the long lost totem, they try to get it for themselves by kidnapping the girl and blackmailing Rufus into turning it over.  The bad guys are out of luck today.  The book ends with a finite ending to these events but clearly sets the stage for a continuing series.  Hicks illustrations are wonderful and really the highpoint of this graphic.  Her characters are cute and lovable and yet 'real' with an edge.  I always find that she seems to draw the same female character over and over again in her books but this time the main female character has some of the same qualities found in her usual style while venturing out to look different.  Hicks' characteristic style is highly present though and this is a visually pleasing and well-presented piece.  With a Canadian author and illustrator it makes a great addition to Canadian comics.  I enjoyed it and would read the next book.