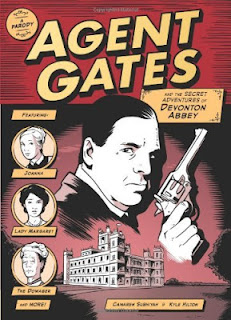 Agent Gates and the Secret Adventures of Devonton Abbey by Camaren Subhiyah. Illustrated by Kyle Hilton   (US) - (Canada) - (Kindle)

First sentence: "Sir Alistair has spread word our new hedge maze can be walked in under twenty minutes."

Publisher's Summary: "Presenting a parody spin on the characters we know and love from the hit show Downton Abbey, this story is told through the eyes of the downstairs staff—especially one secretly badass valet John Gates, who turns out to be an undercover spy for Her Royal Majesty's British Secret Intelligence Agency (the SIS). Gates and several other Devonton staffers are part of a nationwide top-secret division of operatives scattered throughout country estates, all supervised by (who else?) the Dowager Countess, a close personal friend of Queen Victoria herself.

Armed with his own superpower—his limp disguises a steampunk titanium leg perfect for dispatching enemies of the crown—Gates's mission is to protect Devonton Abbey from foreign spies, assassination attempts, and traitorous household staff, all while posing as the valet to the utterly clueless Lord Samson. Action-packed antics ensue, romance blossoms, and, as usual, the downstairs crew continues to run the show...and always saves the day."


Acquired: Received an egalley from the publisher through Netgalley.

Reason for Reading: I love these upstairs/downstairs type of British dramas.  However I have not ever watched Downton Abbey as I don't really watch TV these days.  The general plot along with the time period and the tongue-in-cheek humour of this book made me think I would enjoy it even though I would miss out on the Downton Abbey links.

And enjoy it I did.  I have no idea how the story connects up with Downton Abbey but I certainly enjoyed the insider jokes when it came to class behaviour and mores of the times.  While the drama of the family is going on behind the scenes, the main plot here is Agent Gates, posing as a man's valet, along with a few other secret agents working for the SIS, must uncover any plot going on at Devonton that could potentially bring war to the surrounding countries.  Gates is fun, with his titanium steampunk leg and the other agents also each have some 'magically' enhanced power.  While I enjoyed the class tale, it was the spy story that engaged me the most and kept me reading the book pretty much straight through.  Fans of the show will most likely get a big kick out of this but you needn't have watched the show to enjoy the spy or time period story.  Lots of fun!