19. The Golden Twine by Jo Rioux 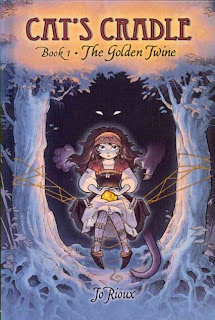 Publisher's Summary: "To most, Suri is just an orphan in a traveling caravan. But Suri is determined to prove she has the mettle of a monster tamer. When she unknowingly takes something valuable from a caitsith — a cat monster — she will have to quickly harness her powers ... if she even has them!"

This is a fun children's story which I would recommend for about ages 7-12.  I don't usually give an ending age but I don't think the story will hold the interest of those much older.  I found the story cute but would not be likely to read much further.  That said it will be a fun romp for the intended ages.  The story starts off with the reader being plopped into a situation not knowing quite much as to what is going on, giving us a mysterious aura as we figure out who the bad guys are, what the monster is and Suri's intriguing character proves to be more complicated than she first appears.  I did quite enjoy the illustrations and with the cat-theme carried over in the shape of the eyes of the characters.  I also thought the mouse names of other characters to be clever as well, such as Suri, which is a play on the French word "souris" for "mouse".
Labels: 2012 3* canadian author fantasy graphic novel Kids Can Press MG