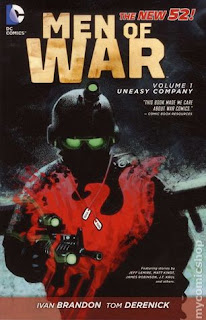 by Ivan Brandon
My rating: 3 of 5 stars

This is a bit weird, but I liked it. I was expecting war stories and got that but mixed in with meta-humans and supervillains. Joe rock is the grandson of the famous "Sgt. Rock" and he is the lead on a special force which gets sent out basically on black ops nobody else knows about. These end up having some kind of weird villain involved. The book is comprised of a couple of arcs which are completely unrelated to the DC universe and they were quite good once I got the feel for it. Especially the last one, which hints that this state of affairs has been going on even since "Sgt. Rock's" days and leaves us with a lot of intriguing questions, but then the series was canceled ... The book then ends with a bunch of random one-off's which have no connection to anything except they are war related to some point. Some were good, especially Matt Kindt's knife fight story. There was even a Frankenstein of S.H.A.D.E. WWII story by Jeff Lemire but none of the others had any characters connected to anything, simply short stories. A good read if you like war stuff but totally unnecessary to read within the New 52 continuity.