Lost in NYC: A Subway Adventure: A TOON Graphic by Nadja Spiegelman 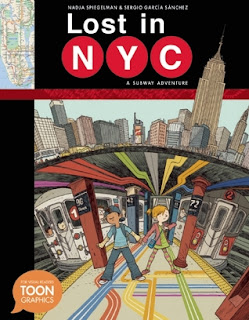 Lost in NYC: A Subway Adventure: A TOON Graphic by Nadja Spiegelman
My rating: 4 of 5 stars

Sprawling cityscapes drawn from intriguing angles fill the pages of this delightful tour of New York's Subways. A class field trip to the Empire State Building brings about a teacher's discourse on the history and running of the subway system while a new student who moves frequently because of his father's job adds some drama to the story. The illustrations are wonderfully detailed and just filled with people not unlike a "Where's Waldo" giving the essence of busy New York population. Finally, the book ends with real historical and current, captioned photos of New York's subway as it was in the past and is it is now under construction.