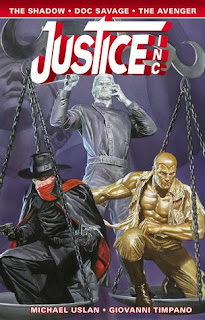 Justice, Inc. by Michael Uslan; illustrated by Giovanni Timpano
My rating: 4 of 5 stars

I love Dynamite's pulp comics, especially their "masked men" series and I really enjoyed this team-up. The Shadow is the only hero of the three (the others being The Avenger & Doc Savage) that I'm familiar with, having read quite a few of his books. He came across much darker than I'm used to in this book, there is a lot of killing, but quite a bit of back story was given especially on why he uses the alias Lamont Cranston. The Avenger is fully realised for the newbie as well with a complete background story and this is, in essence, his book; he's the one who shines and he is the one the sequel will feature as he puts together a new team. Apparently, his backstory has been re-imagined here from his original one but it's a satisfying one. I didn't get a really good feel for Doc, but Dynamite has a whole series for him which I haven't read. The story was quite intense and very WWII and Nazi centred with time travel being the main theme and the core of what the villain, Voodoo Master, wants to control. A good read and great entry in Dynamite's set of pulp hero team-ups.
Labels: 2015 dynamite entertainment graphic novel masked heroes