The Heroic Legend of Arslan 2 by Yoshiki Tanaka 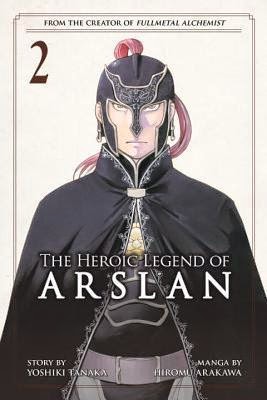 The Heroic Legend of Arslan 2 by Yoshiki Tanaka
My rating: 3 of 5 stars


The Heroic Legend of Arslan (2)

A bit of a let down after the great start of vol. 1 but I'm still interested. Kind of a slow and confusing start as we have a lot of talk between characters, getting to know them, while at the same time trying to remember what happened in vol. 1. (I really miss it when manga does not start with a character profile and story so far intro page.). Then things pick up as a few flashbacks help bring back previous events and the story gets back into military mode and the attack on the castle begins. Large section of intrigue, traitors and battle violence as the castle is under siege. Meanwhile Arslan and gang are avoiding the enemy as they try to return to the kingdom. The Queen plays a prominent role here though we don't get to know her character much further. Two new characters are introduced both of suspicious natures, a masked man who appears to be a traitor to Pars but later we are not sure whose side he is on, the other is a roaming mercenary and lothario who seems to keep to the side who pays him but may actually be something more than he appears. These two are intriguing and the book ends much better than it began. Am most interested at this point to go on to book three before deciding whether I'll continue with the series.