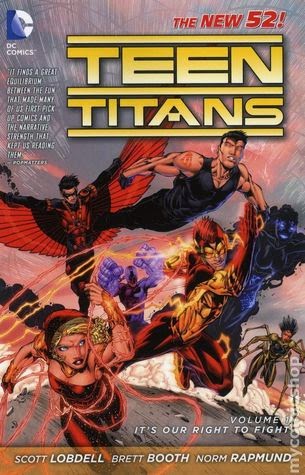 This very much feels like a continuation of Superboy Vol. 1. It takes place concurrently with it and the plot centres around the same evil group N.O.W.H.E.R.E. and its leader Templar. In Superboy the Teen Titans showed up a few times and it wasn't quite made clear what the motivation was there, while here in Teen Titans Superboy is almost a major character and everything between them is fully explained. Except N.O.W.H.E.R.E. is explored more fully in the Superboy volume than it is here. So I think the most logical way to read these volumes would be the way I did it with Superboy Vol. 1 first, followed by Teen Titans Vol. 1, especially if you are going to follow "The Culling" cross-over plot as these are the beginnings of that arc. Now I've met the Titans before in my previous New 52 reading and have actually read Vol. 3 already but up to this point I haven't been too impressed with them. However, this first volume did entertain me way more than I expected! First, because it introduces us to each of the members helping to establish their characters. They are all quite arrogant, angsty teens but I kinda like Red Robin's "Mr. Gloomy" Batman vibe. Second, the Culling plot is good. N.O.W.H.E.R.E. is an evil organization that I can get into. And finally we meet a lot more characters than just the Titans. Some are brand new and others are old DC returnees. Plus there is even a cameo by Static!, out of costume, making my read of that awful volume profitable for the second time.