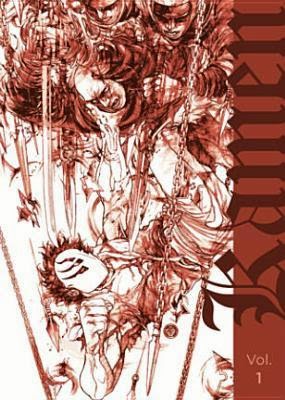 Kamen Volume 1 by Gunya Mihara
My rating: 5 of 5 stars

What a treat! An engrossing historical war story quite unique from the typical manga. A mysterious man with no voice appears on the scene wearing a sentient mask which continually speaks and guides him. While the man never speaks he too has his own will and does as he chooses. The main warrior in the story is a female general which is unusual in this type of manga story. We are not told of the location or time period but the warriors are dressed like and referred to as samurai and the location is similar to middle eastern desert climate. We've been introduced to characters who have powers of strength and dexterity that come from a mystical source, others are masters of the "Nen Arts" which harness the powers of thought dimensions. I fell into this story and read it in one sitting I found it so engrossing. The art is wonderful as well from the first page which is an impressive close up that pans out of the mask and the man wearing it. Even though it is a war story this first volume I'd easily rate T 13+. There is nothing I'd even slightly call objectionable and my 14yo loved it as well.