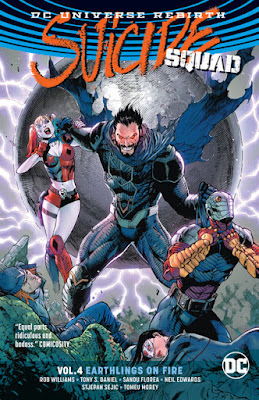 Suicide Squad Vol. 4: Earthlings on Fire by Rob Williams
My rating: 4 of 5 stars

Quite an epic volume in the series. With a kryptonite bomb implanted in his brain, Zod is awakened and forced to join the Suicide League. He's a good fighter to have on your side but he's no team member and he becomes a problem for Waller. The team with Zod is sent after The People and meet up with their Russian counterparts. One team member dies and leadership changes hands. I really enjoyed the Russian meta-humans; they were a lot of fun. Great story with lots of action and an ending that leaves you excited for the next volume.