Wonder Woman: Earth One, Volume One by Grant Morrison 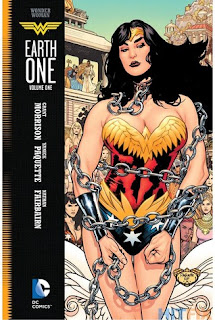 Wonder Woman: Earth One, Volume One

by Grant Morrison
My rating: 3 of 5 stars

This is pretty good. Like the other volume ones of the Earth One series, this is a new origin story for Wonder Woman and Morrison goes back to WW's 1940s beginnings and gives us a grown-up version of the story we are most familiar with. Steve Trevor crashes on Paradise Island and Diana leaves with him to the "Mans World". I'm not too keen on the feminism and lesbianism but they're not too heavy-handed and I did appreciate the nod to Wonder Woman's illustrated history with bondage. Overall, it's a decent origin story and I like Diana's character: the spoiled Princess turning into a person who cares about the world she's been protected from. It will be interesting to see how it continues from here when she meets the other superheroes.