Johnny Cash: I See a Darkness by Reinhard Kleist 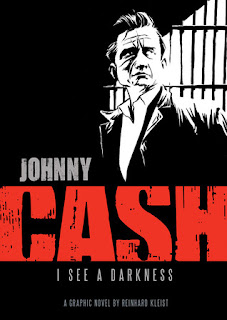 Johnny Cash: I See a Darkness

by Reinhard Kleist
My rating: 4 of 5 stars

A well-written biography of Cash starting with his childhood and ending with him in a studio in the woods recording his last album. Concentrates on the Folsom Prison concert as the pinnacle of the realisation of his dreams and tells a side story of Glen Sherley the man in Folsom who sent a song to Johnny. The book tells the story we're all pretty familiar with since the movie with Joaquin Phoenix but Cash's character is examined from various viewpoints including both his wives and various performers he worked with who both agreed and disagreed with his worldviews such as Carl Perkins and Bob Dylan. The art is in black and white and appropriately stark. The characters all look enough like who they are supposed to, to be recognisable but I was more keen on June Carter's depiction than Johnny's. A cool device I liked was every so often one of Johnny's songs would be told graphically with Johnny as the lead character. This really showed how much of a storyteller Cash was and why his songs are so mesmerising. I really enjoyed the book. Cash was treated with respect while examining all aspects of his life: the drugs, addictions, affairs, recovery, and deep Christian faith. Even though he had a dark life and was a troubled man, the book manages to have you singing along when it features his songs. Well worth reading if you are a fan of Johnny Cash.