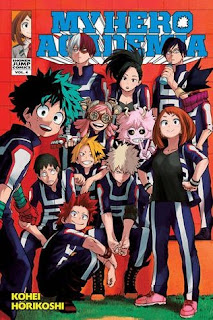 by Kouhei Horikoshi
My rating: 5 of 5 stars

A great volume action-packed with battles but also gives us great insight into a lot of characters. The book starts off with a team challenge where the contestants divide themselves into teams of four and play until four teams have captured all the points. Then the rest of the book does one-on-one battles with the remaining sixteen players ending before the final battle. While the main character is developing and gaining in his powers it is the close look at all the various side characters which really makes this volume shine. My favourite of the series so far!