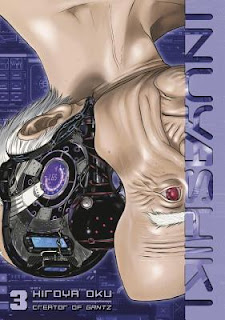 by Hiroya Oku
My rating: 4 of 5 stars

An intense, brutally violent volume. This volume features Inuyashiki only as he takes on a deranged yazuka member. I was hesitant going into this volume knowing from the summary and the mangaka's previous work that it was going to be of a sexual nature and wondered if perhaps it would be past my tastes. I needn't have hesitated but it is indeed acutely violent, but not how I had imagined. The most disturbing scene is the opening one of male on male rape. There is a lot of female nudity during an abduction and attempted rape, which turns into physical violence. This abduction is pretty much the crux of the story and it seems to be a one volume case for Inuyashiki. It's an intense read, the art is stupendous and emotional but it doesn't really further Inuyashiki's character at all. It also doesn't appear that there is any plot advancement either leaving me to wonder if the sexual nature and violence of this volume are only gratuitous. This influences my 4-star rating of the volume, and I'll wait for the next one to see where the plot and characters go from here.