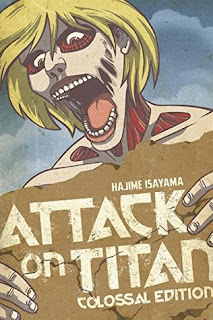 by Hajime Isayama
My rating: 5 of 5 stars

Exceptionally designed omnibus edition and brilliant continuation of the manga series. This oversized deluxe collector's edition omnibus gathers together volumes 6 to 10 of "Attack on Titan" with many extra supplementary illustration pieces throughout including the original covers to each volume at the back. The book is soundly bound, lays flat and is printed on quality paper and with five books for the one price you are getting a price deal. I won't go into what happens volume by volume but this is the most intense and creepy-freaky manga I've ever read. Reading it at night makes me keep the hall light on! These volumes centre on the female titan whom they've discovered is a human (like Eren) who can go Titan and has been living as a spy amongst them. She's trying to kidnap Eren, causes a lot of death and destruction. Another abnormal Titan is found called "Beast" because he has hair all over him like an animal. He talks and is big and very scary. We learn some really disturbing stuff about the Titans and the ministers of the Wall Religion. So much more knowledge has been known than has been given to the people. The troops are trying to get to the bottom of the truth, in the meantime the world is becoming creepier and creepier. An absolute much read for anyone who calls themselves a manga fan!