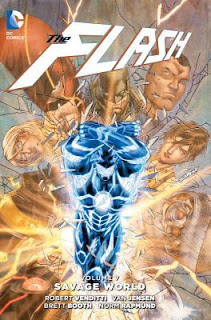 by Robert Venditti; illus. by Brett Booth
My rating: 5 of 5 stars

I love it! I haven't managed to get into the DC alternate Earth's but I love the Speed Force. Here in volume 7, Barry finds himself being chased by dinosaurs and high-tech robots when he becomes trapped in the Speed Force. There he finds a community of humans from various time eras past and present with a leader who has an uncanny knowledge of the Speedsters. Meanwhile back on Earth, a future but younger version of Barry Allen in a blue suit has turned up, full of vengeance to capture a killer whom he was never able to catch in his version of the past, called Overload. Lots of action and excitement, the two storylines worked well together and kept me turning the pages. Very exciting end with the return of a new old villain. In the background, we have Patty and Barry's relationship being examined and the book ends with a one-off backstory of The Flash's origin story with the murder of his mother and imprisonment of his father.