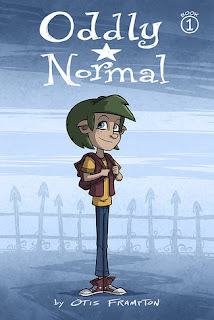 by Otis Frampton
My rating: 4 of 5 stars

A fun fantasy for middle graders that I really enjoyed. It's fairly typical of any comic with monster kids at a monster school but Oddly herself is a charming character. Kids will relate to her issues: being different, bullied and ultimately wishing her parents would disappear in a moment of anger. She has a witty sense of humour and is a down-to-earth kid, sometimes standing up for herself while other times running away from dangerous. I found the story unpretentious in its kid-friendly storytelling and the art is comic and humorous. I was only displeased with the cliffhanger ending. Thank goodness I have book 2 coming up right away! 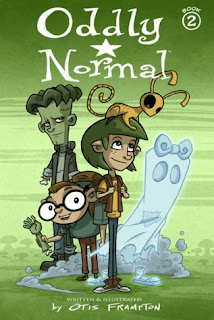 by Otis Frampton
My rating: 5 of 5 stars

Oh, I just loved this volume but I can't believe it just ended when it did! Come on, where is Book 3?! I love Oddly so much! She is such a refreshing character! This volume doesn't go too much into her parents disappearance but mostly pays attention to her growing school friendships (and enemies). Also, she is finding out about her mother's past and there are hints at a mystery there. As from the first book, there is a teacher who has it in for her for some reason which seems to have to do with her mother and that along with the bullies she hires for extra credit continues to be the antagonist. I'm loving the art and find the story to be all ages appropriate. Fun!