Apollo: The Brilliant One by George O'Connor 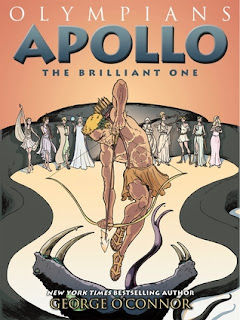 Apollo: The Brilliant One

by George O'Connor
My rating: 5 of 5 stars

I'm a huge fan of this series and Apollo was all that I expected it to be. O'Connor has changed his narrative style several times with these books and here he switches once more from just telling a narrative tale. The nine muses gather together to tell us several of Apollo's deeds and misadventures through their eyes, letting Apollo speak for himself frequently so we don't miss out on his self-idolatry pomposity. Apollo is only out for himself and it is hard to care for him, especially when a girl would rather be a tree than the next wife on his list, but one person he truly did care for was his son and when Zeus kills him we get shown and understand that bit of half-mortalness inside him. Usually, the stuff that happens in these books is fairly basic for someone who has done a lot of greek myth reading but I was pleasantly surprised to find quite a bit of new information in this one for me. Admittedly, I can't recall Apollo being a big feature in much I've read so I really enjoyed the information on his son, Asclepius. Lovely, exciting, interesting book to add to the collection, as usual! Looking forward to the next one, as usual!