Dad's Not All There Any More: A comic about dementia by Alex Demetris 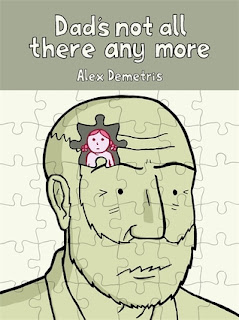 Dad's Not All There Any More: A comic about dementia

by Alex Demetris
My rating: 5 of 5 stars

This is a comic introducing people to Parkinson's with Lewy Body Dementia, the second most common form of dementia, after Alzheimer's, but not heard of by many people until the unfortunate death of Robin Williams, whom it was disclosed had been suffering from the disease. A Lewy Body diagnosis cannot be confirmed until an autopsy is done on the brain.

This was a very personal read for me as my Dad was diagnosed with Parkinson's and we had inquired about LBD and been assured he didn't have it but this Christmas his diagnoses was officially changed to Parkinson's with Lewy Body Dementia.

The comic is very straightforward and factual, not touchy-feely yet uses humour, which I appreciated. It introduces you to this progressive, aggressive disease then shows what you can expect. It shows a small family (husband, wife, and son) dealing lovingly and sensibly with how this neurological disease ravishes both the body and the mind. The book shows the father always being treated with dignity and respect and that we must always remember that it is the disease, not the person, causing the unpleasantness. I really enjoyed the art as well and felt it carried the same tones of dignity.

While this short book does not go into comparing Alzheimers and Lewis Body very much, it does manage to show the difference. Lewy Body sufferers don't regress instead memory varies from extremes day to day, and they may be very much aware of their hallucinations. In fact, they can often tell you about them in vivid detail. Both are severely debilitating but overall they present very distinctly.

This is a short book that manages to give a large dose of information for those looking for an introduction. It is a personal story and touching but not over-emotional which I appreciated as it was just the right amount that I could take at this stage in my own journey. A good start if you want an introduction to the disease or are ready to hear other people's experiences.