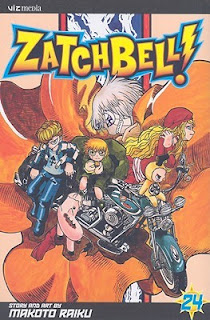 by Makoto Raiku
My rating: 3 of 5 stars

A battle volume from start to finish as they work their way to the brain of Faudo. Nothing spectacular, all pretty straight forward. Two bad guys are defeated and we loose one good guy but it was one I always found rather creepy so I wasn't bothered much. 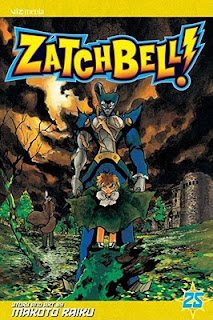 by Makoto Raiku
My rating: 4 of 5 stars

This is the last book translated into English and ends mid-battle! In the first part mamodo Ted is reunited with his beloved who happens to have been taken over by the evil side. Our gang gets closer to the brain during this part and we lose both a good and bad guy, kind of sad here. Then the rest of the book has them reaching the anti-chamber next to the brain with lots of action getting there. Many mamodo come back on the scene from where they've been waiting, there's some great humour and an epic return and loss. The final boss protecting the brain room is being fought when the book ends. Also, Kiyo has been out of action the last few volumes leaving Zatch unable to battle, so we've seen him take on a leadership role that has really matured his character.

There are 8 more volumes left in the series and since they aren't available in English I will (for the first time ever!) be resorting to scanlations to finish off the series. It's just too good to stop now.