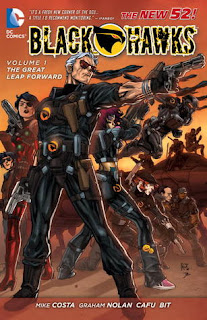 by Mike Costa
My rating: 3 of 5 stars


This isn't too bad really, but it had more potential than it gave. It's an action/adventure high-tech military operation kind of like A-Team, but more character driven and sci-fi like Stargate while the enemy they meet is a hive-collective like the Borg. So that's all really cool, but sadly there is no character development, almost all the characters are created from scratch for this series and there are no back stories for anyone. Boo! Lady Blackhawk, of course, is a mainstream DC character, but I don't know her. I liked everyone else but wanted to know them. There are 8 issues gathered here, that was plenty of space to include a backstory of some sort for everyone. At least they were given notice of cancellation as the book ends on a final note and there are character threads floating around so it's possible somebody could show up again. Not terrible, not connected to the DC Universe in any way, and certainly not required reading, but not a waste of time. I enjoyed it for what it was.