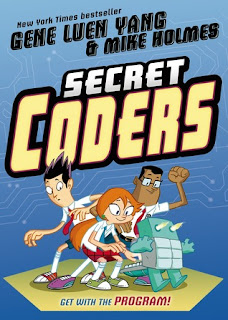 by Gene Luen Yang; illus by Mike Holmes
My rating: 5 of 5 stars


Whenever I see Gene Luen Yang has a new book out I get all giddy with excitement. And he has done it again and brought us something completely different and unique. The beginning of a new series "Secret Coders" has secrets, strange goings on and creepy staff at a private school that looks more like a haunted house. What makes this book so fun and novel is its interaction with the reader. Software coding is the topic of the day and Yang weaves this through the first volume by having the characters learn through puzzles and logic reasoning. Before the characters are told the answers to the puzzles and riddles they (and the reader) are asked to solve it themselves. (This is within the narrative of the story; it's not a puzzle book that you write in or anything of that sort). This first book in the series teaches binary code then moves on to the concept of coding being a set of commands. It's truly engaging and the plot involves strange birds with 4 eyes, a robotic turtle, a mysterious blue-skinned man, an evil janitor and the main character's father suddenly abandoning his family. The book ends with an unsolved puzzle leaving the reader waiting for the next book.