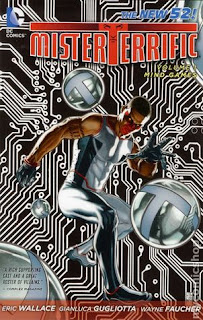 by Eric Wallace
My rating: 2 of 5 stars

I wanted to give up on this a few times but made it through to the end. It's just a bunch of short episodes giving Mr. Terrific a new reboot. The last one was the best but it was cancelled and the book leaves us with his fate unknown. I'd never heard of Terrific before and I think that's a horrible superhero name. He's really arrogant and only believes in science making it difficult for him to have relationships since he has no faith in anyone. It's all pretty lacklustre no good villains but the last story has a hybrid computer/man whose ok and the Blackhawks show up briefly to arrest Mr. Terrible because he's a vigilante and we're given some backstory between them. Cliffhanger ending, though I think he comes back on one of the Justice League teams.