Theseus and the Minotaur by Yvan Pommaux 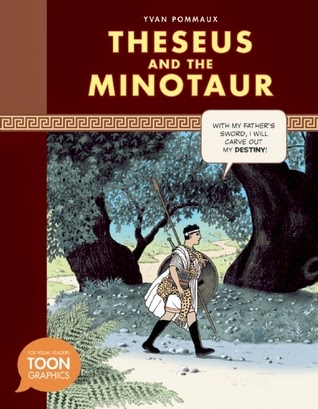 Theseus and the Minotaur by Yvan Pommaux
My rating: 3 of 5 stars

For the first time I'm not terribly impressed with a TOON book. What I did like was the art. It amazingly captures the ancient Greek style to perfection. The story is true to the original myth, including even little details such as briefly mentioning leaving Ariadne on an island. It also doesn't skip over the adult themes often found in Greek mythology but manages to allude to them while keeping the book age appropriate. For example the story of how the Minotaur is born of a bull and human. As a great reader of the Greek myths I appreciate all this in good children's retellings. However I found the book an uncomfortable read, especially one labeled a graphic novel and wonder how appealing it actually is to kids. It is a large, picture book size and the story is mostly told in the narrative with illustrated frames and text bubbles which simply reaffirm what has already been told in the text. There are only a few places, mostly nearing the end, where the speech bubbles actually take over in telling the story. Also, since this is a Greek myth there are obviously a lot of strange Greek names that no child will know how to pronounce properly and the editorial decision here was an awkward one. Every time a new proper noun is introduced it is marked with an asterix and footnoted with a pronunciation guide. This ends up creating sentences with multiple asterixis and clusters of tiny phonetic dictionary pronunciations at the bottom of almost every page. It distracted heavily from the flow of reading, imho.