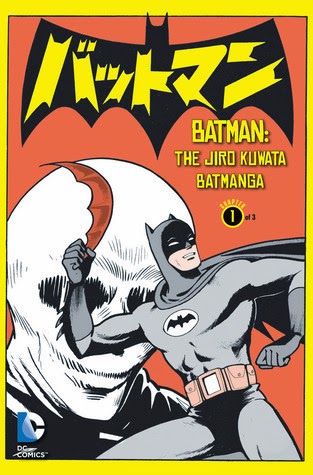 Batman: The Jiro Kuwata Batmanga Vol. 1 by Jiro Kuwata
My rating: 5 of 5 stars

Oh I can't tell you how much I've enjoyed these stories. This is old 1960s detective Batman chasing after bad guys, no superheroes in sight. We never have any indication whether Batman & Robin are in the US or Japan. Japan is mentioned once and we do know they are in Gotham, but the where is not certain. B&R are loads of fun just like in the campy '60s show. Their appearance in costume is pretty much what we'd be used to in the '60s but their real life persona's are a little different. Both have a tiny Japanese air about them, though the art is not modern manga in any way. Bruce Wayne is very young. Twenty-five would be a reach and he's got a Frankie Avalon swoon-worthy look, while Dick Grayson is this little kid who wears a tuxedo all the time. The book is perfectly All Ages safe except for the intriguing habit of making the villain say "dammit" about once in every chapter. B&R just say "darn". Each story is about 3 chapters long and the Dynamic Duo meet some strange criminals in this alternate Japanese reality. First, we come across Lord Deathman. Can he really make himself dead whenever he wants? Its an easy way to get out of being arrested. Next is Dr. Faceless, a scientist who gets trapped in his own experiment and has his face removed going insane running around town trying to remove faces from everything including people and clocks. The Human Ball is a scientist who invented a substance that repels objects and bounces; he makes a suit of it and wants to sell to the highest bidder, but Batman and Robin are out to stop him from selling it to an International spy. Next a professor trying to gain a gorilla's strength accidentally swaps him his own intelligence, then Karmak, the Gorilla sets off to exact his revenge against mankind for its mistreatment of animals. Another scientific based theme, which has a device that can control the weather, has Go Go the Magician using it to his advantage to steal the treasures of Gotham. The Dynamic Duo have a hard time going up against the weather. Finally the last story is different; it's longer, being four chapters instead of three and so far all the stories have been about normal criminals or scientific devices that while improbable are not actually impossible. This time though we have a mutant gene and Batman and Robin find themselves face to face with a completely non-human villain. This one was heavy on the theme of heroics and probably my favourite of the lot. I really enjoyed this manga. It was a lot like reading classic Batman but set in an alternate reality, very campy, fun and the villains all laughed "Wa ha ha ha ha!" Fun!