The Royals: Masters of War by Rob Williams 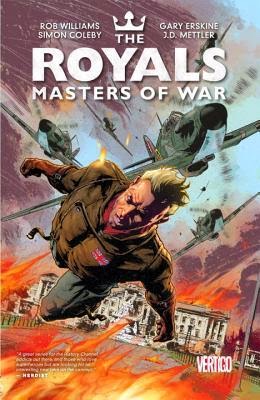 The Royals: Masters of War by Rob Williams
My rating: 4 of 5 stars


An intriguing and page-turning alternate history of WWII that takes on the premise of Royalty having superpowers. The House of Windsor has been secretly convincing the nation that the King, born without powers had sired children who also lack any of their own powers. Here is the deception. All the royalty throughout the world has been in hiding since the events of the French Revolution, and then the mass murder of the Russian royal family. So the royalty is sitting idly by during WWII until Prince Henry of England, young and idealistic, can sit by no longer, gets involved and all hell breaks loose. Then comes a fantastic retelling of WWII, with the presence of the allied leaders: Churchill, Roosevelt and Eisenhower mostly. The royals have superpowers such as strength, flying, laserbeam eyes, mind control and so on. It was a rush for me to read this and the ending was a big surprise, a double shock, and very satisfying. Once finished one can see that the author and illustrator have made some thoughtful commentary on war in general.