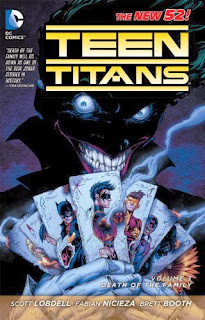 "The team is finally reunited in the wake of “DEATH OF THE FAMILY,” but something is very wrong with Red Robin! What did The Joker do? As Red Robin’s condition worsens, he and the team must face an even greater threat when the new Dr. Light is sent for Solstice! Learn more in these stories from TEEN TITANS #0, 15-17, BATMAN #17 and RED HOOD AND THE OUTLAWS #16!"

May contain spoilers.  I've been reading all the "Death of the Family" trades to check out how DC pulls off a large crossover story like this.  At this point I've read them all except the Nightwing trade.  I've never been a fan of the Teen Titans except for the animated cartoon, so was not too excited about this volume.  They have appeared in other volumes of this crossover, most heavily, the Red Hood Vol. 3 and they didn't endear themselves to me.  Pretty much all the middle part consisted of issues that had been published at least in part somewhere else in this crossover, so I was basically re-reading material but I admit it was enjoyable to see it in this particular order as it mostly concerned the Joker storyline.  The beginning issue I really enjoyed as it did a back story on Red Robin, which I'm not familiar with.  The last issue brings the TTs back together after the Death crossover and starts their own story back up again and while nothing has happened to make me the least bit interested in any of the Titans, I have begun to quite like Red Robin himself.  The book ends on an exciting cliffhanger moment which provides an extremely intriguing plot that I'm tempted to read Volume 4 just to see what happens next.  I do think this volume might be a bit confusing for fans who are only reading Teen Titans as the Joker stuff probably won't make too much sense without having followed at least another of the Batman series. 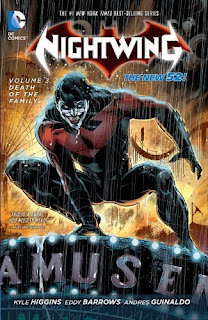 "In this title collecting NIGHTWING #13-18 and BATMAN #17, The Joker returns to Gotham City, and he’s more dangerous than ever! The Joker sets his twisted sights on the members of the Bat-Family and hits them where it hurts—and for Dick Grayson, that means going after the family he’s built up for the past year at Haly’s Circus!."

Received an egalley from the publisher through Edelweiss and then purchased my own new copy from an online retailer.

Loved, loved, loved it!  OK, I was fed-up with yet another issue of Batman #17 to start off with but then everything was fabulous.  A lot of Joker story went on and most of it was new to me even though I've read the big Joker volume.  Great action scenes with Lady Shiva and a plot with her develops.  Nice bit of relationship romance starting to go on for Dick and then fabulous intimate moments with Damian at the end.  But that's not all the book ends with a cliffhanger introducing us to a new old villain.  Can't wait for volume 4!