421. The Last of Us: American Dreams by Neil Druckmann & Faith Erin Hicks 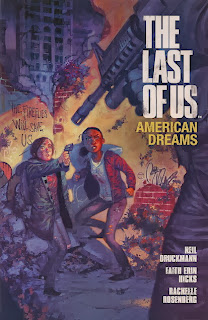 "Nineteen years ago, a parasitic fungal outbreak killed the majority of the world’s population, forcing survivors into a handful of quarantine zones. Thirteen-year-old Ellie has grown up in this violent, postpandemic world, and her disrespect for the military authority running her boarding school earns her new enemies, a new friend in fellow rebel Riley, and her first trip into the outside world.

* The official lead-in to the game from Faith Erin Hicks (The Adventures of Superhero Girl) and Naughty Dog’s Neil Druckmann!"

Received an e-galley from the publisher through Netgalley.

I really enjoyed this story that manages to be unique and interesting while following a common theme:  post-apocalyptic earth where a virus has infected the majority of the population turning them into some kind of crazed zombie-like people who chase after and eat non-infecteds.  The story centres around two orphan girls who sneak out and venture out into the city to see if they can find a future for themselves besides the one the orphanage will lead them too, fighting in the army.  I read everything Faith Erin Hicks writes/illustrates and her work here is top-notch.  She has really raised the level of her bar in the last couple of books, bringing nature scenes to her art in the last Bigfoot book and this novel here has her distinctive characters with detailed cityscape backgrounds.   The book itself is hard to rate though, because while I loved everything about it; it is quite confusing at first (though not hard to figure out as you go along) and everything is left open-ended because this graphic novel is the prequel to a video game.  I'm not a gamer so I'll never find out more that way.  This book most certainly should have included an introduction to give readers the background information that someone who plays the game would already have known.  It is however a genuinely intriguing story. I'm thinking/wishing that if the game (never heard of it before) is popular enough to generate a prequel graphic novel perhaps this will also generate enough interest to continue on with the story in graphic format; I'd like to know more about Ellie and Riley.
Labels: 2013 4* canadian author dark horse graphic novel post-apocalyptic science fiction YA zombies