356. Red Hood and the Outlaws: Death of the Family by Scott Lobdell 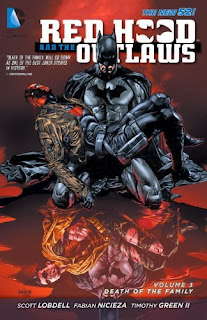 "In these stories from RED HOOD AND THE OUTLAWS #0 and 14-17 and TEEN TITANS #15-16, it’s Red Hood and Red Robin vs. The Joker! And how will the death of Damian Wayne drive Batman into battle against Jason Todd?"

Received an egalley for review from the publisher through Edelweiss.
(At the time of this posting I have since purchased a print copy of this and the first 2 volumes!)

Freaking, freaking, awesome!  First of all I had never even heard of this character before starting the new 52 and jumped in here with Vol. 3 because I'm reading all the 'Death in the Family' volumes to get a feel for how DC weaves a story through the different series.  This volume is perfect for a Red Hood newbie because it starts off with Todd's background story!  The whole thing from his childhood, his stint as Robin, his "death", his connections with Joker and his coming to be Red Hood.  Great!  I feel like I know him already and I like him, A. LOT.  Further in the book we get a briefer dose of Roy Harper's background but not enough for me to connect with him.  Starfire I didn't get to connect with at all during the book, she plays a big part, both the Outlaws do actually, but you're supposed to know who they are by this time and I didn't get any vibes that made me like either of them.  So while this book leaves me 100% wanting to read Vol. 4, I have to know what happens to Todd now!, I'm not sure yet whether I will read this series.  Hood's torture session with the Joker is incredibly intense and from the books I've read so far in this crossover, I've got to say he suffered the worst at his hands.  This is dark, dark stuff folks!  Halfway through the volume Archer and Starfire, looking for Red Hood, meet up with the Teen Titans as they are looking for Red Robin.  I'm not a TT fan, except of the cartoon show which I always enjoyed with Raven being my favourite.  So we get two issues of the Outlaws and the Teen Titans working together to stop a mess Joker has left behind on the homeless people for them to deal with.  None of this endeared the Outlaws or the Teen Titans to me and I'm not particularly looking forward to my read of the TT volume of Death in the Family now but ... we'll see. Three random sightings:  Hugo Strange, a new Teen Titan member and the Suicide Squad.  The final climax with Joker, Red Robin and Red Hood is priceless.  Amazing dark page-turning stuff that precedes the usual issue #17 showdown with the whole family gathered to dine with the Joker.  Again this has been cut just little bit different.  The final issue once everything is over with the Joker is brilliant and leaves everything in the lurch for Todd.  What will happen next?

Where does this leave me now?  This cliff-hanging ending has me putting Red Hood V4 in my basket for pre-order already, after reading that volume I'll decide whether to continue the series or not.  (I already bought 1-3!)  This volume also left me with no particular interest in the Teen Titans of which I already had none.  However, this is the second time in the Batman run that the Suicide Squad has turned up and I'm wondering who the heck they are plus this volume alluded to a lot of interesting things that have happened in Batman, Inc and Detective Comics giving me a little spark of interest.  I always loved Detective Comics as a kid ... read 70s/80s.
Labels: 2013 5* Batman DC Comics graphic novel superheroes