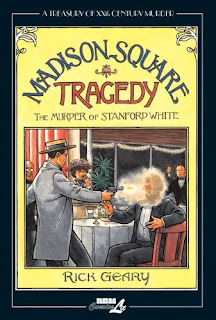 A Treasury of XXth Century Murder (6)

"Stanford White is one of New York’s most famous architects having designed many mansions and the first Madison Square Garden. His influence on New York’s look at the turn of the century was pervasive. As he became popular and in demand, he also became quite self-indulgent. He had a taste for budding young showgirls on Broadway, even setting up a private apartment to entertain them in, including a room with… a red velvet swing. When he meets Evelyn Nesbit, an exquisite young nymph, cover girl, showgirl, inspiration for Charles Dana Gibson’s “The Eternal Question” and for the later movie “The Girl in the Red Velvet Swing,” he knows he’s on to something special. However, Evelyn eventually marries a young Pittsburgh decadent heir with a dark side who develops a deep hatred for White and what he may or may not have done to her, setting up the most scandalous murder of the time."

Received a review pdf from the publisher.

What can I say?  Another fine entry in Geary's Murders series.  This one is slightly different in that there is no mystery here.  I've read all the other books in both these series and as far as I can recall each of those had at least some element of either not knowing who the killer was or a lasting doubt as to whether the guilty/not guilty verdict was in fact the truth; or simply that the killer(s) got away with it.  In this high-profile case, there was no question as to the murderer as he committed it in public and 'fessed up immediately.  This is the story of how that murder came to be, the scandal that surrounded it and the stories of the lives of the three participants from birth to when they became inseparably tied to this scandalous murder.  I had heard of Evelyn Nesbit and the scandalous life she lead, that she had been "the woman" in a murder of passion but really didn't know much more about this case.  I love the way Geary tells the story starting with one person's birth up until he meets the next person, then that person's story until she meets the third person and finally that persons story from the beginning until all three are wrapped up in the same tale.  This is one of my favourite time periods, the very early 1900s, and any murder involving decadence and wild sex stories was sure to capture the country's attention.  Usual brilliant Geary art par excellance, needs no further description.  I'd read a phone book illustrated by the man!  My only complaint?  The long wait till Geary's next book!