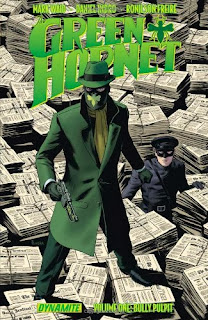 "The Green Hornet faces the most dangerous enemy in the his long and storied career: his egotistical and arrogant alter-ego, Britt Reid! A journalist with great influence in his city, Reid takes on the public persona of a social crusader, but he's far too sure of himself and his judgment. When he finally oversteps his bounds, an innocent man pays a terrible price... and the legend of the Green Hornet may be forever tarnished! "


I've really been enjoying Dynamite's "masked" hero comics and although I've never been  fan of the Green Hornet in the past (and by this I mean the pulp serials/movies from the 30s/40s) I decided to give this one a try anyway since I like Mark Waid.  I'm very pleased with this first volume!  This volume introduces us to Green Hornet and though he's been working as the  masked hero/villain for a while the book starts at a pivotal moment in his career.  We get some flashback moments to let us know about his past and briefly how he became the Green Hornet and joined with Kato.  The main issue here though is a character study as GH is faced with his own ego and possible corruption.  Kato becomes his conscience and won't work with him anymore leaving the Hornet to grapple with how to lead this lifestyle and still be able to live with himself.  A very well-written story and I absolutely adore the character of Kato, even more so than the Hornet himself.  I'm really glad I decided to read this and will be reading volume 2!
Labels: 2013 4* dynamite entertainment superheroes