"Boxers & Saints is a groundbreaking graphic novel in two volumes. This innovative format presents two parallel tales about young people caught up on opposite sides of a violent rift. Saints tells Vibiana's story, and the companion volume, Boxers, tells the story of Little Bao, a young man who joins the Boxer Rebellion. American Born Chinese author Gene Luen Yang brings his trademark magical realism to the complexities of the Boxer Rebellion, and lays bare the universal foundations of extremism, rebellion, and faith." 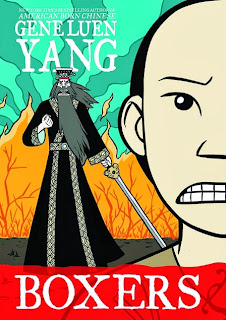 "China,1898. Bands of foreign missionaries and soldiers roam the countryside, bullying and robbing Chinese peasants.
Little Bao has had enough. Harnessing the powers of ancient Chinese gods, he recruits an army of Boxers - commoners trained in kung fu who fight to free China from "foreign devils."

Against all odds, this grass-roots rebellion is violently successful. But nothing is simple. Little Bao is fighting for the glory of China, but at what cost? So many are dying, including thousands of "secondary devils" - Chinese citizens who have converted to Christianity."

I'm very interested in Chinese history and have read about the Boxer Rebellion before.  When I saw this set of books were about to be published I wondered what the Catholic-Chinese author would have to say and how he would say it.  As a Catholic myself this was my main interest as I knew the history already.  It is a beautifully told story of a peasant boy's miserable life as he is lead through the ranks of this raggle-taggle army representing themselves and any other peasants wanting to join in.  They believe their gods have magic and that the magic is transformed through them as they fight making them unbeatable.  Truth, inevitably brings them down.  However, there were people on both sides who were cruel and there is no "good side" to cheer for.  Yang makes sure we understand that the Boxers wanted the slaughter of all foreign devils and secondary devils (this means white men and Christian converted Chinese).  No one was safe, boy, woman, or child.  Bao is a character we can sympathize with right away when we see events only from his perspective, not seeing through language and custom differences nor already established prejudices on both sides.  The book is big but reads very fast as there are many wordless action scenes and text does become sparse through many other scenes.  The words and the pictures together tell this raw, heartbreaking tale of needless death at a time when China's government was very weak and flip-flopping to side with whomever seemed the safest bet at any appropriate time.  You will care for these characters, though you may not care for what they ultimately choose to do. 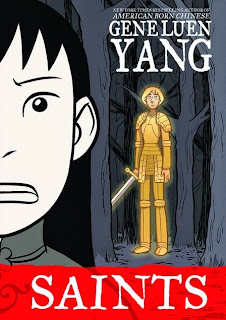 "China, 1898. An unwanted fourth daughter, Four-Girl isn't even given a proper name by her family. She finds friendship—and a name, Vibiana—in the most unlikely of places: Christianity. But China is a dangerous place for Christians. The Boxer Rebellion is murdering Westerners and Chinese Christians alike. Torn between her nation and her Christian friends, Vibiana will have to decide where her true loyalties lie . . . and whether she is willing to die for her faith."

Being Catholic myself, I expected just a wee bit more from this book than it delivered however I came away from it quite satisfied.  Boxers and Saints are stand alone books that can be read separately but the books need to be read together to experience the true impact of the novels, especially this one.  I would recommend reading Boxers first, then Saints.  I can see some people saying to read them the other way around because some things happen in Saints that are explained in Boxers but by reading Boxers first, one is hit with emotional revelations from that story as told in Saints.  I didn't quite take to the use of St. Joan, hence my 4 star rating, as it felt clear to me Vibiana is not have visions of her, and I can't find any historical references of anyone having had visions of her; while if one knows the history, the Boxers actually believed they had magical powers from the gods and the Empress was led to believe so before she would agree to support them.  Christ came across as a true vision to Vibiana, though.  CRYPTIC SPOILER ALERT.  It is extremely poignant that one person gives their life for their religion while giving the gift of life to another through that same belief.
Labels: 2013 4* 5* catholic China christian first second books historical fiction war YA