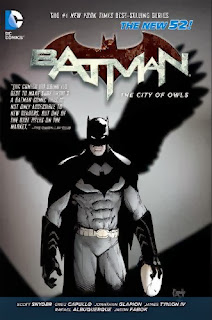 "Unleashing their deadly assassins known as the Talons, Batman must stop the insidious Court of Owls before they claim the city for their own. In doing so, The Dark Knight will uncover dark secrets - not just about the city he's sworn to protect, but about the history of the Wayne family."

Holy Freaking Awesome, Batman!!  Absolutely fantastic storyline that culminates the Court of Owls story arc but leaves it open-ended so that these bad guys could certainly return in the future.  The surprise reveal of who the villain really is and the secrets unveiled about Bruce's past are an amazing addition to the Batman story.  I just loved them!  I'm sure everybody knows what they are by now but I won't say just in case :-) Totally, totally was glued to the pages for this entire book.  Two things stuck out for me that seemed wrong though; first was an issue in the middle that featured Mr. Freeze as the bad guy with a cameo by the Penguin.  It was fun to see Freeze, I really enjoyed the story but it seemed a bit odd stuck in there as the connection to the Owls was a bit forced.  It made sense but it just seemed like they were sticking in some familiar villains just for the sake of it.  The other was the last issue which features a new character, Harper Row, I didn't like it at all.  I was bored to death with the story, Batman doesn't show up till near the end, there is a quick scene with an old villain, Tiger Shark, and one sentence referring to the Court of Owls.  Obviously Harper is going to be someone in future issues (rumours abound she will be a new Robin!  God, please! No!) or this lame introduction to her wouldn't have been featured.  Art was totally awesome, even though a lot of artists are listed Capullo still does most of the work and it is brilliant, dark, gloomy and stunning.  Can't wait to read the next collection which collects all the tie-in stories from the other DC Universe comics to get the final complete "Night of the Owls" story!
Labels: 2013 5* Batman DC Comics graphic novel superheroes